An Event with the Ascended Lady Masters

An Event with the Ascended Lady Masters - Introduction

An Event with the Ascended Lady Masters - Description

The Key Participating Lady Masters are:

Bringing forth Individual Clarity of Purpose and Destiny

“I am one who calls on Goddess and expects an answer.”

Audio is low, please use headphones.

Who are Ascended Masters?

Ascended Masters are believed to be spiritually enlightened beings who in past incarnations were ordinary humans, but who have undergone a series of spiritual transformations originally called initiations.
An "Ascended Master" is a human being who has taken the Sixth Initiation, also referred to as Ascension, and is thereby capable of dwelling on the 6th dimension or above. An "Ascended Master" is a human being who has regained full union with his/her "Mighty I AM Presence." When a human being has regained full union, that state of Being is referred to as "Ascension." Imagine … there are thousands of Ascended Masters helping us now. All you need to do is ask and set your intention to commune with them.

Rev. Merriam has been preparing for this channeled communication since 2016.
The 3 Lady Masters, Rasha, Isis and Athena, work in a Trilogy Field of Energies that spin counter clockwise, connecting into Mother Earth, and relating to the 3 lower chakras of the root, the reproductive areas and the gut. They speak Ancient Wisdom Messages to those listening and also answer generic and personal questions in the second half of the event.
The 3 Lady Masters, Quan Yin, Mother Mary, and Mary Magdalene, work in a Trilogy Field of Energies that spin clockwise, connecting into the higher realms, and relating to the 3 upper chakras of the heart, throat, and third eye. They bring forth incredible healing energies to all those listening, at the same time the Wisdom Messages are coming through. Those in the physical audience as well as audio and/or video audiences, may physically feel their presence around them.
These two opposing spinning Trilogies of Energies create a powerful Toroidal Field.
The 7th Lady Master, Leah, is an Elohim Creator Goddess who helped to create our Original Cosmos and Galaxy and Solar System. While the Wisdom Messages and Healing Energies are brought through to the audiences, she brings through a powerful and clear beam or column of Light/Love/Goddess energy down through the center of the Toroidal Field, and directly into the listeners’ crown chakra that will bring clarity to their Divine Purpose and Destiny.

Who is Lady Master Rasha? 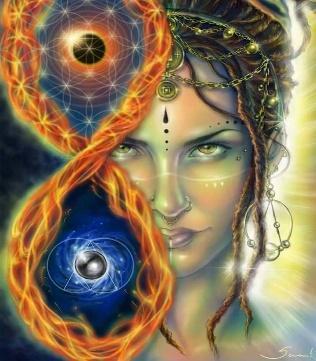 Ascended Lady Master Rasha was introduced to humanity in the 70’s through the physical trance mediumship of Rev. Keith Milton Rhinehart and the Aquarian Foundation. Prior to that and/or since then, she is basically unknown to humanity. In the recordings from Rev. Keith, Rasha is the Soul Mate/Twin Flame of Odyssa, a more known Master likened to El Moriya and Kuthumi Lao Sing. Together they rule over the Orange Ray of the Cosmos which helps develop the natural intuitive and psychic abilities of humanity through the evolvement of a person’s Third Eye Merkabah Portal.
From Merriam’s personal experiences in meditation and trance, Lady Master Rasha is an Ancient Being who lived on this planet over several lifetimes in Lemuria and Atlantis and Egypt and now resides in Shambhala, the Sacred Light City of the Ascended Masters, located in a higher dimension and sometimes seen by the Yogis of the Himalayas.
Lady Master Rasha has been with Merriam and assisted her as her main Master Teacher for the past 40ish years. Today she is at the forefront of bringing the Cosmic Feminine Goddess Energies into Planet Earth in an effort to help heal Pacha Mama and balance the masculine Patriarchal energies that have so longed removed humanity from the understandings and actions of Living in a State of Love and Compassion.
Rasha works with Isis and Athena bringing forth Wisdom Teachings and spinning counter-clockwise the lower Chakra Trilogy Energies of the Toroidal field through Rev. Merriam.

Who is Lady Master Isis? 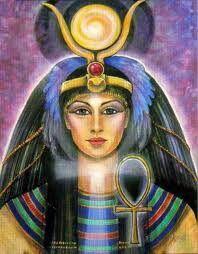 Ascended Lady Master Isis was first Atlantean and then the Goddess of Motherhood, Fertility and Devotion in Egypt. She was known to be the ideal mother and friend to everyone, rich or poor, especially children. Isis married her brother, the Divine King Osiris, who was later killed and dismembered by his brother Set. Isis, who had great magical powers, distraught by intense grieving, decided to find her husband and bring him back to life long enough so that they could have a child. Isis roamed the country, collecting the pieces of her husband’s body and reassembled them. Once she completed this task, she breathed the breath of life into his body and resurrected him. Once they were together again Isis became pregnant and soon after gave birth to Horus, the Sun or Hawk God who became the Divine Egyptian Ruler, removing out of power his Uncle Set.
From Merriam’s own experiences, Lady Master Isis is the perfect combination of strength and kindness, salted with incredible magic.
Isis works with Rasha and Athena bringing forth Wisdom Teachings and spinning counter-clockwise the lower Chakra Trilogy Energies of the Toroidal field through Rev. Merriam.

Who is Lady Master Pallas Athena? 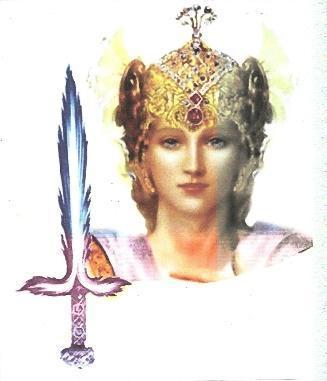 The Ascended Lady Master Pallas Athena is known as the ‘Goddess of Wisdom’ and the ‘Goddess of Truth’. Pallas Athena as is also known as the Goddess or Master of courage, inspiration, civilization, law and justice. Pallas Athena resonates with the Warrior Goddess within us, and she encourages us to live and speak our truths. She inspires valor and compassion within us and also assists us to understand Sacred Geometry.
Merriam met Athena in a deep meditation years ago and Athena has acted as her Gate Keeper ever since during channelings for individuals seeking guidance.
She also assists us with expressing ourselves in the most loving and purposeful ways. Pallas Athena encourages and helps us to look for new ways to approach situations, overcome obstacles, make ‘right’ choices and take responsibility and control of our lives. This enables us to actively create our own realities and experiences, rather than just reacting and responding to the events that take place around us and to us. Pallas Athena encourages us to be pro-active about our own lives. She brings the strength and courage to overcome obstacles and adversity.
Pallas Athena works with Isis and Rasha bringing forth Wisdom Teachings and spinning counter-clockwise the lower Chakra Trilogy Energies of the Toroidal field through Rev. Merriam.

Who is Lady Master Quan Yin? 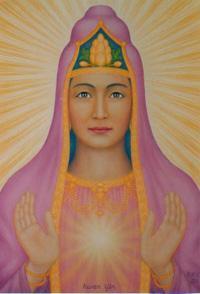 Known as the Goddess of Compassion and Mercy, and a Lord of Karma, Ascended Lady Master Quan Yin is also a powerful Master of Healing. In meditations, people meet her in her healing garden where the “Waters of Life” bless them with physical and spiritual peace from the Well of Souls that is filled with the energies of many Ascended Masters. Her name means… “She who listens to the cries of the World.”
She, along with Buddha, oversee the Cosmic Green Ray of Healing, bringing boundless love and comfort to all people by easing the pains of human life. People who pray to her often experience the Waters of Grace that fall from her watering pitcher. She is considered to be a gate or a bridge to the higher realms; an oasis filled with the healing waters of life. Teaming up with Mother Mary and Mary Magdalene, she brings a formidable force of love and compassion to this healing Trilogy.
Quan Yin works with Mother Mary and Mary Magdalene bringing forth powerful healings and spinning clockwise the upper Chakra Trilogy Energies of the Toroidal field through Rev. Merriam..

Who is Lady Master Mother Mary?

In the traditions of Christianity and Islam and Judaism, Mother Mary or Virgin Mary or Saint Mary or Mother of God, was said to be a virgin when she birthed the Messiah Jesus the Christ. She and her husband Joseph were both Masters, trained by the Essenes and have become a shining example of a loving family. She is known and revered by millions and has appeared in many forms to thousands of believers over the centuries. Mary, a model of Love and Mercy, is a great healer and works with the trifold flame of the heart and the colors of pink, blue and white. By her example and constancy, she calls forth the Divine Woman in us all, to create a most powerful and compassionate healing Trilogy.
Mother Mary works with Quan Yin and Mary Magdalene bringing forth powerful healings and spinning clockwise the upper Chakra Trilogy Energies of the Toroidal field through Rev. Merriam.

Who is Lady Master Mary Magdalene? 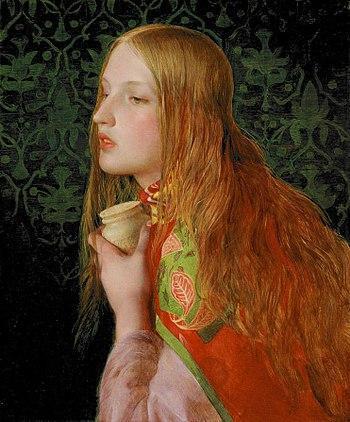 Ascended Lady Master Mary Magdalene got a bad rap in Christian history and most of what has been told about her is totally bogus. She came from a wealthy Royal family line and trained in Mastery with the Essenes just like Jeshua. She was just as adept as Jeshua in magic and metaphysical mysteries and thus often times acted in his stead. DaVinci placed her next to Jeshua in the painting of the Last Supper.
She lived at a time when a woman could be stoned to death for speaking publicly. Yet, regardless of this life-threatening possibility, Mary Magdalene shared her unique message as a Spiritual Leader to vast populations of people who needed to hear her voice and witness a woman in public ministry and as the wife of Jesus. Full of courage and grace, and demonstrating a direct connection to Source, she gave us a Legacy of Love and inspired countless people to embody their own sovereign gifts for spiritual leadership.
Mary Magdalene works with Mother Mary and Quan Yin bringing forth powerful healings and spinning clockwise the upper Chakra Trilogy Energies of the Toroidal field through Rev. Merriam. 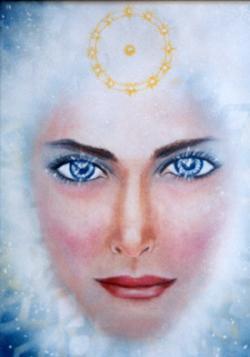 Elohim is a combined masculine and feminine Hebrew word that denotes a God or Creator and represents an entity that brings forth Power of Effect or the Ability to Create in a loving and balanced form. Elohim Leah is not in an imaginable form but instead is so large, she comes through as a Divine Creator Essence in a beam of Light through the Center of the Toroidal Field Merkabah created by the opposite rotating Triangles of the other six Ascended Lady Masters.
Rev. Merriam believes that Leah is one of the Creator Gods of our Cosmos and assisted in forming our Galaxy and Solar System and Planet Earth.
Working with the Ascended Lady Masters of Wisdom: Rasha, Isis, and Athena, whose Triangle of Energies rotates Counter-Clock-Wise into Mother Earth, and the Ascended Lady Masters of Healing: Quan Yin, Mother Mary, and Mary Magdalene, whose Triangle of Energies rotates Clock-Wise into the Heavens, Leah brings through the Center of these Toroidal rotating fields, powerful energies in a Diamond-Like Beam of Light that gives Clarity relating to a person’s Divine Purpose and Destiny in their Lifetime here on Earth.

FOR FURTHER INFORMATION AND PERSONAL READINGS, CHANNELINGS AND HEALINGS WITH REV. MERRIAM JOAN HANDY, CONTACT HER AT: